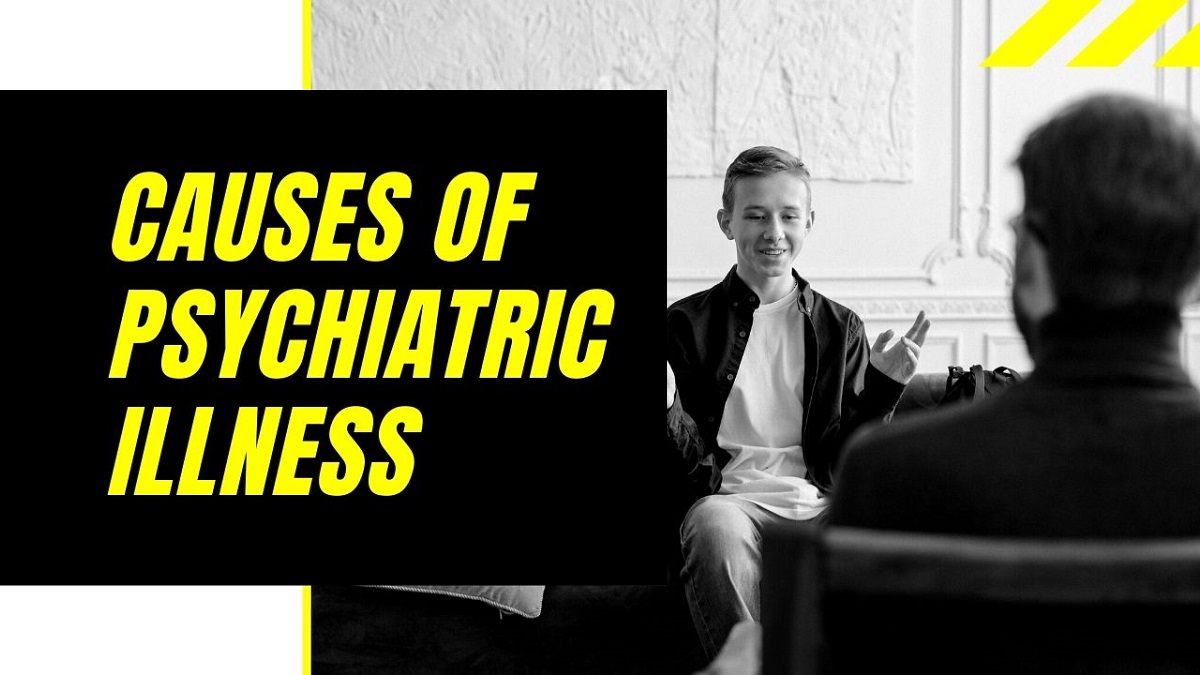 Although the exact cause of many psychiatric illnesses is unknown. There are some pieces of evidence to show that many of these illnesses are caused by multiple factors e.g.,  biological, genetic, psychological, and environmental factors. We will discuss these factors one by one.

1. Brain and its chemistry:

Some Psychiatric illnesses have been linked to abnormal activities of nerve cells called neurons or abnormalities in pathways that connect different areas of the brain.

Brain cells or neurons communicate with each other in these nerve pathways through neurochemicals called neurotransmitters. The psychiatric problem can start when these neurotransmitters are not functioning normally.

Common neurotransmitters are acetylcholine, serotonin, GABA or Gama aminobutyric acid, dopamine, glutamate, etc. These neurotransmitters work in harmonious relationships with each other and keep check and balance for their function.

These neurotransmitters are responsible for the normal functioning of the brain. Neurotransmitters decide our sleep, behavior, thinking, emotions, perception, sexual behavior, etc. Defects in or injury to certain regions of the brain have also been linked to some Psychiatric disorders e.g., amygdala, limbic system, basal ganglia, prefrontal cortex, etc.

Psychiatric illnesses are sometimes hereditary, it means they are in the genes and they run in families. It suggests that people who have a family member with a Psychiatric disorder have chances to develop almost similar or same mental illness down the family line.

This nature is transferred from parent to progeny in families through genes. Research shows that some Psychiatric illnesses are caused by abnormalities in genes that may involve more than one gene. Genes interact with the environment, which shows that even in identical twins mental diseases present in a unique way.

This is the reason that a person carries a susceptibility to a psychiatric disorder and doesn’t necessarily develop the illness.

The psychiatric disorder may appear due to the interaction of multiple genes. Other factors which can alter functioning and expression of genes include mental stress, physical stress,  abuse, traumatic event. These factors can influence or trigger a mental disorder.

Defects in or injury to some brain regions have also been linked to some psychiatric disorders.

Some evidence suggests that a disruption of early fetal brain development or subtle injury that occurs at the time of birth — for example, inadequate oxygen supply to the brain after birth may lead to the development of few Psychiatric illnesses e.g., ADHD Attention deficit hyperactive disorder, mental retardation, autism.

Psychological or emotional trauma may contribute to the development of mental illness. For example, children who suffered from emotional, physical, or sexual abuse are prone to develop mental illnesses like depression, anxiety, personality disorder, bedwetting.

An important loss, such as the death of a family member, divorce, loss of property or money, loss of a job, loss of organ may cause the development of certain mental illnesses e.g., conversion disorder, psychosis, depression, anxiety, eating disorders.